Wag on the Wall

In my dining room hangs a large brass cased clock my daughter in law Katy refers to as the clock with the big spoon hanging off it.  This clock is a "Wag on the Wall" style clock. 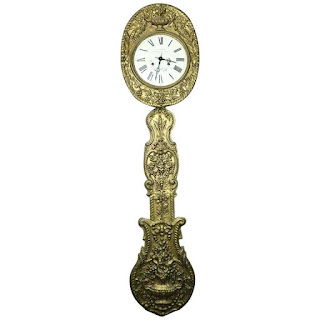 According to the Merriam Webster dictionary,  the definition of Wag-on-the-Wall is a noun, a clock that hangs on the wall with exposed weights and pendulum.  There is more to the story than just that simple statement.

To most clock people a Wag on the Wall refers to a large clock, made in the French countryside, with intricate brass work surrounding the dial and a large, imposing brass work pendulum.

Typically these clocks were fashioned in the winter months, when the agrarian life style took a short respite.  On many of the dials for these clocks the makers name and often the location in which the clock was built, is inscribed. 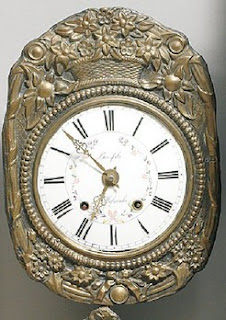 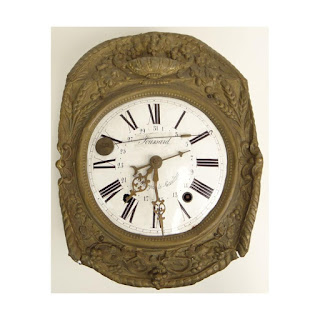 The clocks are typically a simple lantern style movement with a bell strike and weight driven.  A simple clock, yet robust in its operation potential, with minimal maintenance. 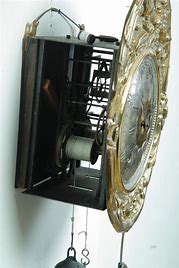 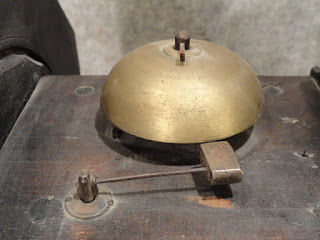 The brass work surrounding the dial and that of which the pendulum is crafted, is created in a repousse style.  Repousse is the art of forming the metal into a form with several tools, typically in a wooden form. 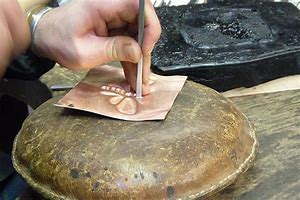 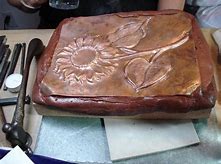 The Wag on the Wall style clocks starts as a shelf mount or wall hung piece.  After the family possessing the clock becomes more affluent, a case is often commissioned by the family from a local cabinet maker to house the piece, thus creating a beautiful and unique floor clock. 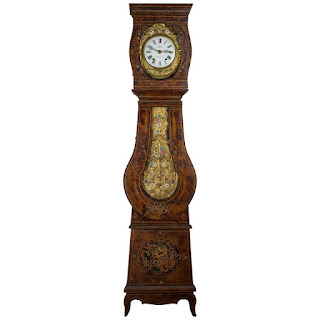 Posted by The Clock Man a.k.a. Dorrin K Mace, Horologist at 7:13 AM