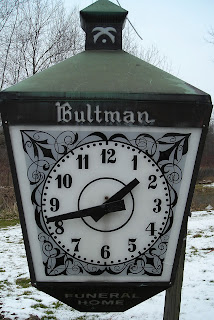 
The Bultman Funeral Home in New Orleans, LA, also known as The House of Bultman, was operated by members of the Bultman family from 1883 until 2005.  Several historic persons were prepared for burial by the Bultmans to include Confederate President Jefferson Davis, actress Jayne Mansfield, and writer Anne Rice’s husband, Stan Rice to name a few.
Damage from Hurricane Katrina prompted the closure of the Funeral home and the assets were put up for auction.
The clock was purchased by a collector in Michigan.  After the purchase the collector determined the clock was not to his liking and too much restoration was needed.  Once again the clock was put up for sale.
Dorrin Mace from Pine Knoll Clock Shop purchased the clock in Saginaw Michigan to keep it from going to a scrap yard.

The clock was purchased by Pine Knoll Clock Shop in September, 2011.  After extensive cleaning and restoration to the movements, dials, hands and lighting, the clock was put on display in front of the clock shop in November, 2011.

After purchase of the clock Dorrin began to do research on the clock and the original owners.  It was determined the clock was from the 1940's and was prominently displayed in front of the funeral home.  The Bultman family was famous for their style and lavish parties given at the funeral homes.
Play write Tennessee Williams stayed for a period in one of the 3rd floor rentals and would look down at the clock for inspiration and time keeping.  The play Suddenly Last Summer was written while he was staying at the funeral home.  A scene from the play takes place in the atrium at the funeral home and is referred to as the Jungle Garden in the play.

Posted by The Clock Man a.k.a. Dorrin K Mace, Horologist at 1:10 PM