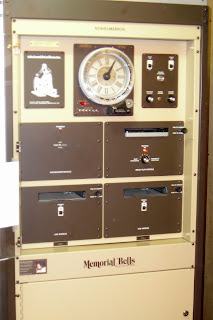 Originally part of the “Carillons Across the Nation” program of the AMVETS.  This program was orchestrated and executed to enable all national cemeteries to have carillon music for funerals, memorial and observance services.  The Carillon was presented and dedicated to the Fort Custer National Cemetery in Augusta, Michigan on September 22, 1985 by the AMVETS (American Veterans) organization.  Partial funding for this and many other carillons came from donations given by American Armed Forces Veterans of WWI, WWII, The Korean War, and the Vietnam War.


The Carillon suffered a lightning strike in April, 2011 and was condemned as beyond repair.  Dorrin Mace from Pine Knoll Clock Shop located the item in Hastings, Michigan and purchased the unit in December, 2011

Pine Knoll Clock Shop could not let this historic piece be relegated to the scrap yard and was determined to have it repaired and operational.  The unit had played at countless funerals, memorials, observances services for our American Armed Forces members and was funded by their donations.  This legacy was not treated lightly; several hours of research and hands-on work were put into the unit and it was once again operational in February, 2012

The carillon calls the Westminster Chimes Monday through Saturday 7am - 9pm; Sunday 9am-9pm.
Musical selections play at 10am, 12noon, 3pm and 6pm daily.