Arguably, the most famous tower clock is "Big Ben" in London.
Big Ben is the nickname for the Great Bell of the clock at the north end of the Palace of Westminster
in London and is usually extended to refer to both the clock and the clock tower.  The official name of the tower in which Big Ben is located was originally just The Clock Tower, but it was renamed Elizabeth Tower in 2012 to mark the Diamond Jubilee of Elizabeth II

This 4 faced clock was completed in 1859 and stands 315 feet tall.  An imposing structure.

But what is a tower clock?  A tower clock is also referred to as a turret clock; in its purest this is a large, weight driven mechanism, designed to display the time one or more large dials. 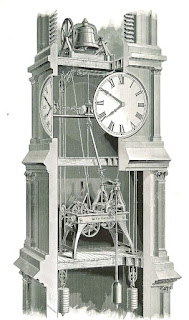 Because of what Movies have conjured up as well as the ability of a persons mind to run wild, many people think a tower clock movement must be some giant mechanical monster 20 feet high with gearing 5 feet in diameter. 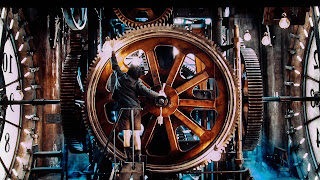 Truth be told, most tower clock movements average about 5 feet wide, 4 feet deep, and 5 feet tall for a time only unit. 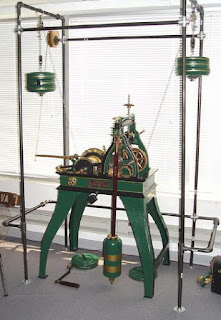 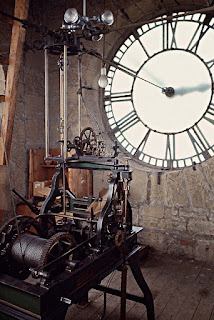 The carillon or bell playing portion of the movement can be much larger as it must control the sounding of several bells at different intervals and with different melodies.  The melodies are played by utilizing a pinned drum that activates the hammers striking the bells.  The drum is driven by a weight or electric motor and is activated and stopped via levers on the clock movement. 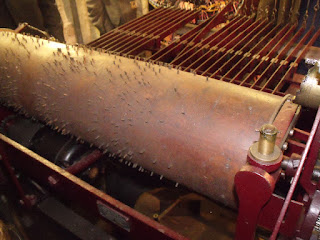 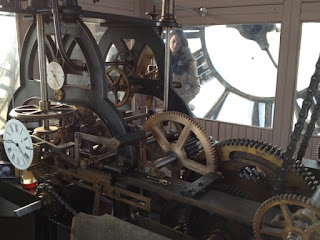 An electric movement has the advantage of a minimum of maintenance, but only hums from the electric drive instead of hearing the pleasing tick tock as the pendulum swings and the verge arrests and releases the escapement wheel.
An electric movement is small in size and easy to maintain, but I like the large mechanical units. 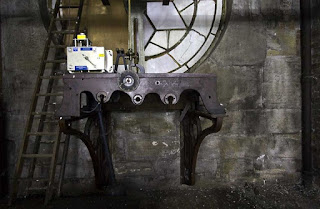 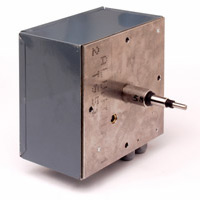 I love tower clocks, their appeal is their size and sound.  I have been and will continue to be on the search for a tower clock unit to repair and display in my shop for customers and visitors to enjoy.  Someday...

Posted by The Clock Man a.k.a. Dorrin K Mace, Horologist at 7:02 PM