When I was 10 years old or so, I took a trip with the CB Rangers Explorers to Detroit.  One of the highlights of the trip was a stop at Dearborn Village where I got to see the famous Floral Clock that Henry Ford moved to the village from the Detroit Water Works Park, subsequently retrofitting the original water powered movement with a weight driven pendulum movement.  I am currently working on finding original plans for this clock in hopes of recreating this in its original water powered design.
The changes I anticipate including on my version of this famous clock:
1) Crafted from Lexan allowing visitors to view the works
2) No live florals would be planted on the clock, I would use preserved vegetation for the numerals and leave the remainder open to view the mechanism. 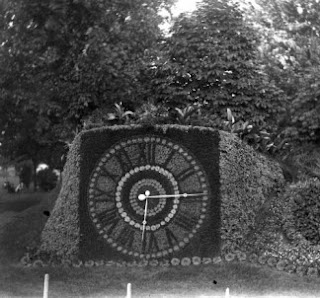 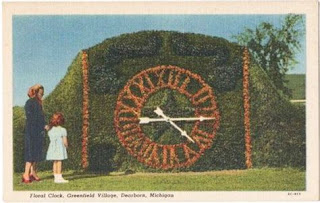 Below is the story of the Floral Clock provided by the Historic Detroit Organization:

Few cities in the United States had waterworks systems in the early 1800s. A growing Detroit had growing thirst, so the eventually opened its first distribution system at Jefferson and Randolph Street, which served the city from 1827 until 1850. Having outgrown that, the city built a replacement in 1854 in “the extreme outskirts” of Detroit, near present-day Eastern Market. It opened three years later. But the regionalization of the area’s water system coupled with the city’s growing population and status as a manufacturing center put the plant under incredible strain.
The City Waterworks bought 56 acres of land from owner Robert P. Toms for $35,000 (about $678,000 today, when adjusted for inflation). Located off East Jefferson Avenue near Cadillac Boulevard, east of Belle Isle and even farther from downtown that the last facility, water flowed through the plant for the first time on Dec. 15, 1877, and was fully operational by 1879.
While the area’s main focus was supplying drinking water to the city, this swath of land was much more than just the site of another plant. The water commissioners decided to open the grounds to the public as a park.
This park — which still exists today but is no longer open to the public — would eventually encompass 110 acres with swimming and picnic areas, play equipment like swings and teeter-totters, baseball diamonds, even a library.

Among its attractions were lagoons, swimming areas, a large observation tower and the Floral Clock, which stood near the entrance that was made of flowers and run off water pressure. The clock was unveiled in the park in 1893 and was designed by Elbridge A. “Scrib” Scribner, the superintendent of the park’s grounds. Scribner’s clock ran on cup-shaped paddlewheels that moved as water flowed. The clock itself was made up of more than 7,000 plants that were held in place by chicken wire. It stood seven-and-a-half feet high and was 10 feet across. The dial was 6 feet in diameter and had numerals made out of alternantheras, a type of shrub. The rest of the clock’s face was sempervivum Tectorum, known as common houseleek. In front of the clock sat beds of tulips or begonias.
By the 1930s, however, the clock had become a liability. Park visitors were no longer enraptured by its water-powered wonder. It also stopped keeping accurate time. In 1934, automaker Henry Ford had a fascination with clocks — not to mention relics of American history — and bought the floral timepiece to display at his Greenfield Village. The clock was altered, however, replacing the water-powered mechanism with a traditional pendulum-and-weight mechanism. Unlike its days being powered by water, the floral clock had to be wound twice a day. But also unlike the old days, the clock now kept accurate time. The restored clock sat near the Greenfield Village Gatehouse and was dedicated July 4, 1935. Much like it had at Water Works Park, the clock would delight visitors to Greenfield Village for another 39 years.
In 1974, however, the clock started breaking down, and it was decided to retire the old timepiece. In 1989, Greenfield Village returned the clock to the City of Detroit’s Water and Sewerage Department, which oversees what was Water Works Park.
The clock was moved to the entrance on the island side of the MacArthur Bridge in 1990.

Posted by The Clock Man a.k.a. Dorrin K Mace, Horologist at 6:31 PM