The McClintock-Loomis Company (1908 - 1917) succeeded by the O. B. McClintock Company (1917 - 1949) made large clocks for banks and other financial institutions. These clocks were typically mounted to the side of a bank building and often displayed the name of the institution. Many of these clocks had chime systems. A master clock (located inside the bank building or in a protected area) controlled the outside slave clocks and chime system. 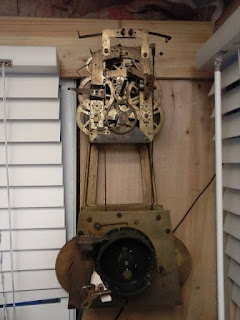 McClintock Clocks were typically the large chiming clocks that were located on the front many banks, and courthouses.

The McClintock company had many great engineering features.  Below is the "McClintock Mercury Switch" that rocked once a minute making a contact that sent an impulse out to the slave clock movements advancing the hands one minute.  Some believe this is a replacement mercury switch as many of the earlier movements had a circular mercury switch.  Both type mercury switches are appropriate. 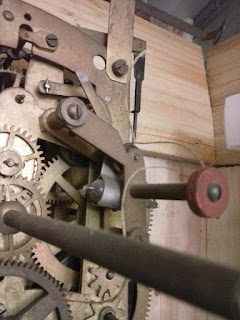 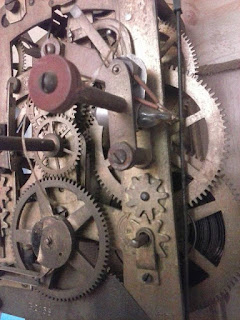 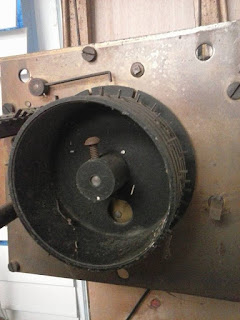 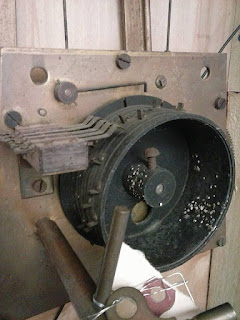 The metal fingers are moved and make contact activating the chime rod chosen as the drum passes by
This unusual chime sequence was to allow those who heard the clock to know the 1/4 hour based on the melody heard.  This sequence was not familiar to many and caused several clients to believe the clock was set up incorrectly as it did not play the traditional 4/4 Westminster Melody.

The hour chime is activated after the 4th quarter chime sequence, contact is made as the count wheel passes and move the metal finger to activate the hour chime strike 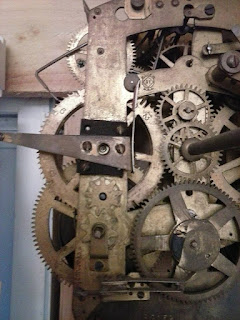 The clock will typically not call the chimes or hour strike during the hours of 10pm and 6:50am
due to the eccentric that disconnects the chiming portion of the clock 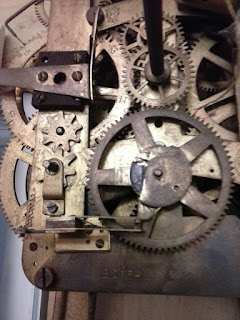 The entire movement carries current though certain portions of the clock.  The connections are completed when the switches are pushed together allowing the current to flow. 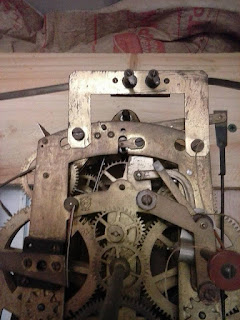 Restoration of this piece will be extensive and time consuming.  The case and dial construction will be with period correct materials.  Additional posts on my blog will be posted as we complete the restoration and attempt to locate a slave clock/chime system for this master clock to operate.

Posted by The Clock Man a.k.a. Dorrin K Mace, Horologist at 8:52 AM