One of the more popular clocks to come into the shop for repair is the humble kitchen clock.  This tallish, thin, often gingerbready type clock is so named as it was typically found in the kitchen of 19th century homes.  Since it was common to spend upwards of 8 hours a day in the kitchen preparing meals, baking, doing laundry, ironing, and the like, it was necessary to have a clock in this most used room of the house to keep track of time.  The fanciest of these kitchen clocks would have thermometers, weather glasses, and alarms.  Through the passing of time and non use of the alarm, it has been forgotten how to set the alarm; we address that forgotten issue in this writing.

This is a typical kitchen clock from the late 19th century. 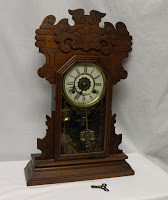 Note in the center of the dial a small circular alarm set disc. 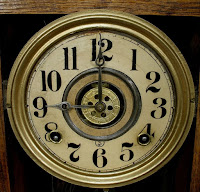 The alarm set disc itself looks like this when it is separate from the clock. 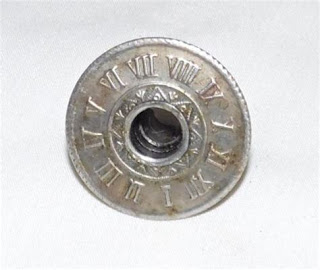 The alarm mechanism looks like this when it is separate from the clock. 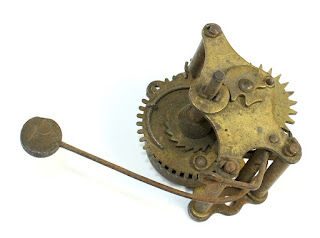 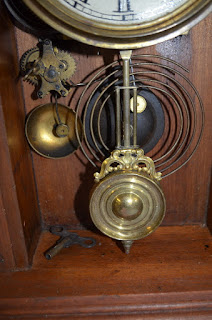 Setting the time for the alarm to activate is a simple task.  The alarm set disc located in the center of the dial is rotated to set the alarm.  This disc must only be rotated CLOCKWISE else damage will occur to the alarm mechanism and the movement will be jammed.

PLEASE NOTE: There is no "snooze" on the alarm mechanism, once it starts ringing, it will continue to ring until the spring is spent.  Also note, there is no AM or PM setting.  If you decide to set the alarm for 2:00 o'clock it will activate at 2 in the morning and 2 in the afternoon; so wind the alarm mechanism only when you want to be alerted by the alarm.

Posted by The Clock Man a.k.a. Dorrin K Mace, Horologist at 5:13 PM