Even after 36 years we still receive in unusual clocks for repair and restoration; this is one of them
Darche "Flashlight Electric Alarm Clock", ca 1907. Advertised as "An Up-to-Date Clock for Up-to-Time People". 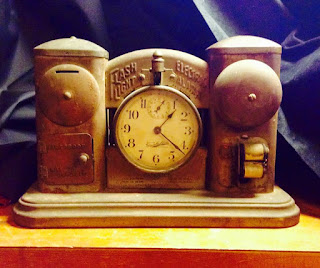 The First Electric alarm clock built by the "Darche Mfg. Co" of Chicago Ill. was in the late 1800's. The alarm was NOT a wind up; but an electric. Run from a battery - cell placed in the right side tower. It also came with a push button switch to light the light bulb above the clock at night.  This one has a working clock. The bank part is unique too with the vault door to remove the money. 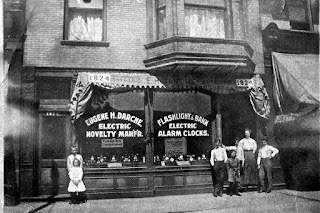 George C. Darche, whose name we are most familiar with on the clocks in question, had several relatives in the business. In 1882 Theordore Darche, a carpenter, and Eugene Darche, a boxmaker, were the only persons listed in the company records. George, a plater, first came upon the scene in 1883. That same year Theodore changed hats from carpenter to contractor. By 1884 Joseph Darche, a millwright, joined the group and Theodore once again changed to CEO of the T. Darche & Co. on South State Street in Chicago. George, in 1885 through 1888, opened up at 31 Clark Street and later at 35 Clark Street, a business of electrical supplies. Good old Theodore in 1887 was now listed as a locksmith and carpenter. Edward, another Darche, appeared in 1888 as an electrician at 416 State Street. The only other Darche to appear was Ephraim, a teamster.
Here we have the nucleus of a good electric clock. A millwright to create the fancy wood designs, a carpenter to construct the case, an electrician to do the wiring, a locksmith to tidy up the case and keep the door shut, a contractor to make sure everyone did what they were supposed to do and a teamster to settle disputes in case they didn’t.
The Darche Electric Co. shows up in 1889 at 37 Clark St., and in 1891 George C. is listed as President and Edward T. is Secretary. By 1895 George is listed as a jeweler at 648 W. 12th Street, and, at last, in 1896 the Darche Clock Co. at the 648 W. 12th address is born. From 1897 through 1902 the Darche Clock Co. shows George C. as President of the company at locations at 618 W. 12th and then at 830 S. Halsted.

The first mention of the Darche Electric Clock Company was in 1903 at the 803 S. Halsted address and in 1904 we see someone other than George as president of the company. Don Evans was president, taking over when George died in 1904. His presidency didn’t last long, for in 1905 Frank Jansen became president and remained so through 1909.
Then, a wonderful thing happened. In 1909 the company underwent yet another name change, this time to Darche Manufacturing Co. with Augusta Y. Darche as President. Yes, a woman! This must have been revolutionary for that time. As a matter of fact, Augusta held the position until 1928 when E. J. Heilman became president.
Going back to the early part of 1904 - perhaps while George was sick and dying - we find that Augusta applied for a patent for a STAND FOR AN ELECTRIC ALARM CLOCK which she received in August of that year no helpless widow she!
In June of 1904 Augusta applied for another patent for an Electric Alarm Clock which was granted in March of 1906. She had invented: "an alarm i.e. the combination of a clock alarm mechanism and an arm adapted to be moved thereby, of an electric signal, a circuit for said signal in the path of movement of said arm and an insulating sleeve movebly mounted on said stationary electrode and adapted to be positioned between said arm and stationary electrode for preventing contact there between and thus maintaining the circuit open."
In 1909 Frank Jansen, while he was still president of the Darche Manufacturing Co., registered the trademark "SEARCHLIGHT" and the F. W. Jansen name appeared on the "Darche" clock. During this time we also find the "Medical Surgical" clock. Darche alarm clock whose switches at the far left front are marked "medical set," and those at the center are marked "surgical set." Confusing? Yes! Could it have been used for electrical treatments or shock therapy?

Below is a photo of a "surgical set" clock taken by a friend of mine in the NAWCC Museum. 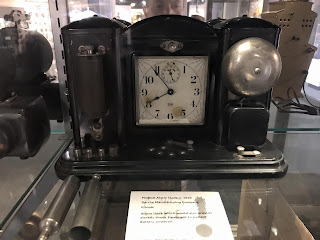 This electric alarm is indeed an interesting piece, one I am thrilled to experience and restore! 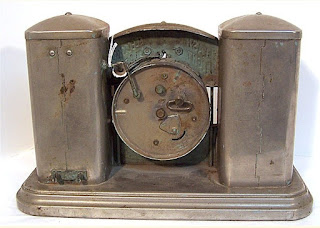 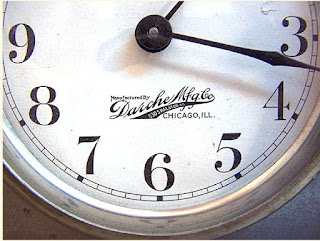 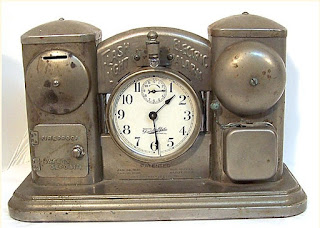 The Darche electric alarm came with a cord and switch set that allowed the owner to activate the light at night to see what time it was,  I do not have the switch and cord set for the clock I am restoring but am looking for one to complete this wonderful piece.  Below is a photo of the electric alarm with the cord set in the front (the red item with the small cord hanging out of the back) 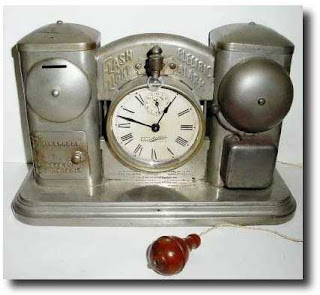