I have on occasion received in clocks with the movements marked "Foreign"  The owners often feel they have a rare piece that was marked foreign to be able to sneak the clock out of the country, or they are unable to locate a clock manufacturer named "Foreign".
Well in reality these clocks are marked foreign usually because the clock guild in the country selling the clock, wants the clock works to reflect made in their country or simply marked "foreign" for any clock made outside of the country. 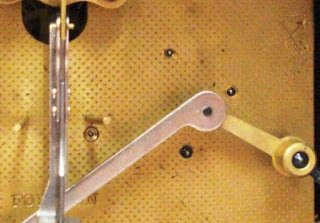 The movement in this photo is marked foreign under the lead and chime arm.  The mark of crossed arrows impressed in the upper right portion of the back plate indicates this was made by the Hamburg American Clock Company.

Typically clocks marked foreign were made by a German clock company and sold in the Unites States and England.  The foreign mark was used extensively after World War II as sentiments about the German people were not favorable.

Posted by The Clock Man a.k.a. Dorrin K Mace, Horologist at 3:00 PM