Daniel Pratt, Jr., clockmaker, banker, town clerk, legislator, was in present parlance a “solid citizen” of the town of Reading, Massachusetts, in the middle 1800s. Reading is a pleasant suburb twelve miles north of Boston. For that part of the State, Pratt must have been a prolific producer, if the number of his clocks still in existence are any indication. These clocks are still running, or capable of running for many more years. 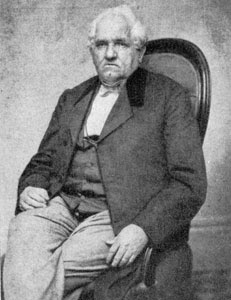 Daniel Pratt (1797-1874), Reading, Massachusetts, clockmaker. From a photograph owned by his great-granddaughter.

Pratt’s other achievements are rather fully chronicled in the Town Records of Reading. About his clockmaking activities, however, very little actual information has been discovered. Moore (1911) listed only “Wm. Pratt & Bro., Boston 1847.” Nutting’s Clock Book (1924) added “Daniel Pratt, Jr., Salem, Mass. 1839″ and “D. Pratt & Sons, Boston, 1849.” Nutting’s Furniture Treasury added “Pratt & Frost, 1832-35,” with the correct partners listed.
It seems unlikely that Daniel Pratt added much to the science of horology but he did provide a large number of families with reliable clocks at modest prices, relieving them from dependence on the sun as a gauge of time. Since the second, fourth, and seventh clocks added to the author’s collection were “Pratts,” the dearth of information about his clockmaking has long prodded this quest for accurate knowledge of his work. Here are the results of the search.
Daniel Pratt, son of David Pratt, was born in Saugus, Massachusetts, on February 24, 1797. Shortly after his birth the family moved to Reading, Mass. His father, David, was a successful shoe manufacturer and it is said that one of Daniel’s early occupations in his father’s plant was packing the finished shoes more tightly by leaping up and down in the barrels into which they had been crammed. Since then we’ve come a long way in packaging. His father died in 1818, leaving considerable property, including a store and the shoe business, to his two sons. Later the brother took over the running of the store. Daniel continued with the shoe company till 1832, when he introduced his clock business in Reading. Jonathan Frost (born June 13, 1798; died April 9, 1881) set up in the spring of 1832 a small clock business, buying clocks from the firm of Burr & Chittenden (1831-1837) in nearby Lexington. It is believed that Burr & Chittenden purchased their clocks from Bristol and other Connecticut makers, reselling them after attaching their labels. They may have made or purchased some clock cases from Pratt or, later, from other makers. Frost is recorded as paying them a bit more than eight dollars each for wooden movements and casing them himself. Later the price was seven and a half dollars. These could well have been Connecticut movements.
Later in 1832, Daniel Pratt formed a partnership with Frost under the firm-name of Pratt & Frost, a partnership that lasted three years (1832-1835). The clocks they sold in this period were wooden movement, weight driven, 30 hour, wood-cased, looking glass type shelf clocks. One of them is illustrated in figs. 2 and 3. All clocks with the Pratt & Frost label so far seen have the older styled, nonadjustable verge inside the plates and the hour-minute motion work outside the front plate. It is possible that these clocks were made this way in order that they would not infringe the Eli Terry patents. Also the gong for striking the hours was usually on the top of the case, not inside.
The case of a typical Pratt and Frost clock measures 35 inches high, 16 1/4 inches wide, and has a depth of 4 1/4 inches. It is usually covered with mahogany veneer over pine. The pendulum rod is 15 3/4 inches long; the door upper glass, 10 1/2 by 10 7/8 inches and the mirror, 10 1/2 by 14 1/2 inches. There are the two usual weights, cords not compounded, running 30 hours. The square dial is of painted wood, 11 1/2 by 12 inches, with Arabic numbers and a dial diameter of 10 inches. The movement winds at 9 (strike) and 3 (power). The paper label reads “…Improved clocks manufactured and sold by PRATT & FROST Reading, Mass.” This label was printed by “J. Howe, Printer, 39 Merchants Row, Boston.” The same clock as above, showing a typical style of casing used by Pratt & Frost.

When the partnership was dissolved in 1835, Jonathan Frost retired from the clock business till 1838 (following the 1837 depression), when he started up again by himself and continued till about 1850. To complete the Reading clock story, there are in existence later type clocks of probable Connecticut manufacture with a label reading “made and sold by Benjamin Frost, Reading, Mass.” As yet there is no further known record of this Frost except that he was born in Reading, June 28, 1826, the son of Benjamin and Mary Frost.
Daniel Pratt successfully continued in the clock business without interruption and built up a sizable trade. In 1838-39 he employed 20 “hands,” securing his workers from Reading and the surrounding area, including North Reading. It is said that having neither water nor steam power, the motive power for his factory was supplied by hitching a horse to an ingenious windlass contrivance that was connected by gearing to the power shafts inside the plant. The horse, walking around in the circle with the pole attached to it, caused the wheels to revolve. Pratt was resourceful enough to have designed this device.
Pratt clocks were “sold all over the country as well as exported.” He enjoyed an export trade to India. An original bill of landing dated May 29, 1841 of a shipment from Boston to Philadelphia is illustrated in fig. 6. To further the domestic sale of his clocks he supplied and sent out “peddlars” who did a flourishing business. 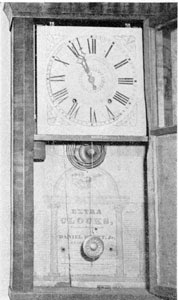 “Brass movements were introduced about 1838,” according to Eaton’s History of Reading. It is doubtful if Pratt himself made these metal works. He probably purchased them from Connecticut. However, he did make wooden movements in his plant, as well as wooden cases. This statement is confirmed by his grandson, Chester B. Pratt, now of Andover, N. H. The wood-cased clocks with wooden works were at this time (1840) less expensive than the clocks with brass movements, and Pratt’s salesmen, wholesale and retail, spread his clocks throughout rural districts in the North as well as in the South, and even outside the United States. They sold his clocks for about 12 to 16 dollars.
That Daniel Pratt later became a “dealer only” is recorded. In 1846 he opened a clock store in Boston at 49 Union St. Eaton says the factory operations continued till about 1858 (depression of 1857). The competition of Connecticut clockmakers probably became so severe that Pratt found it less expensive to buy complete clocks for resale than to manufacture any part of them.
Daniel Pratt is one of the few clock-makers who placed dates on his paper labels — on some, but not all. Today, over l00 years later, this marking is handy in trying to identify the age of a particular clock. Most of Pratt’s own cases were mahogany veneered looking glass or ogee style — the style that was sold by Frost in the period 1838-1850. Alarm clocks with wooden works — identified by the extra brass ring around the cannon tubes — also were put in the same cases.
The Jr. that Daniel Pratt placed after his name on his paper labels seems to have come about in an odd way, his father’s name being David. He is supposed to have said that since there were other Daniel Pratts in Reading, and none of them a junior, he would add the Jr. to identify himself from the others. 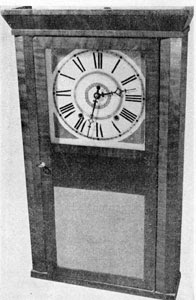 Same clock as above, showing a style of mahogany veneered casing favored by Pratt.

After 39 years of successful business operation of the clock business and other interests and activities, Daniel Pratt died in Reading on March 17, 1871. The Boston store continued long after his death under the name of DANIEL PRATT’S SONS 1871-1880 consisting of Daniel T. Pratt and Benjamin Boyce, husband of Delia Pratt. Eaton says this firm did a rapidly increasing business, importing clocks from abroad, selling nice French clocks cheaper than any other house in the city [Boston].”
From 1880 to Aug. 25, 1895, Benjamin Boyce, as successor, operated under his own name at 49 Union St., later at 119 Hanover St. He in turn was succeeded by Daniel F. Pratt who continued the business as DANIEL PRATT SON at 339 Washington St., later 53 Franklin St., till the death of Frank W. B. Pratt on March 17, 1916. This brought to an end the clock business of the Pratts. The appended table and the above data are for owners and collectors who wish more closely to identify their clocks.
For fellow ferrophilliacs it may be added that Daniel Pratt in 1843 persuaded the Boston & Maine Railroad — which used to go through Wilmington into Boston — to bend its new line from Wilmington Junction though Reading, now the main line of the railroad.
Of Daniel Pratt it has been said: “He was a man of sterling integrity, thoroughly honest and of Arm purpose. As such he held the confidence of his townsmen in a marked degree and always took a great interest in public affairs, having the best interest of his town [Reading] at heart.” He was selectman for 20 years, town clerk from 1831 to 1852, representative from Reading to the General Court in 1845 and 1847, and president from 1843 till his death in 1871 of Reading’s first banking institution, the Agricultural & Mechanical Association. 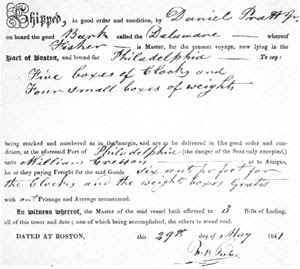 Bill of lading of a shipment by Daniel Pratt, Jr. of "five boxes of clocks and four small boxes of weights," from Boston to Philadelphia.